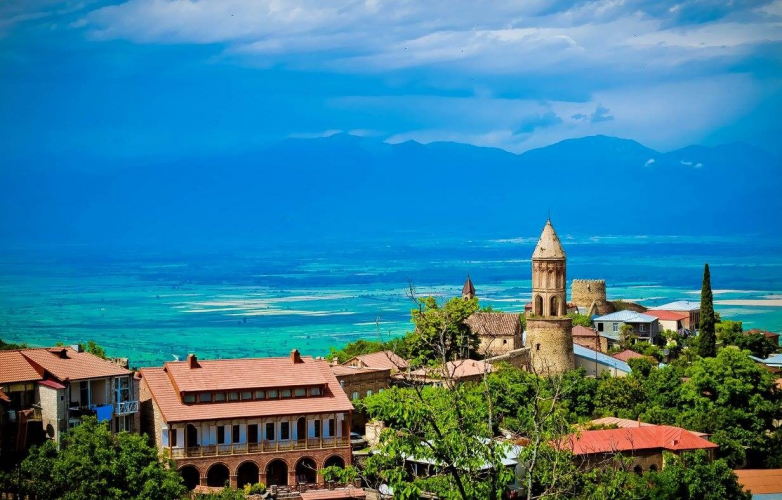 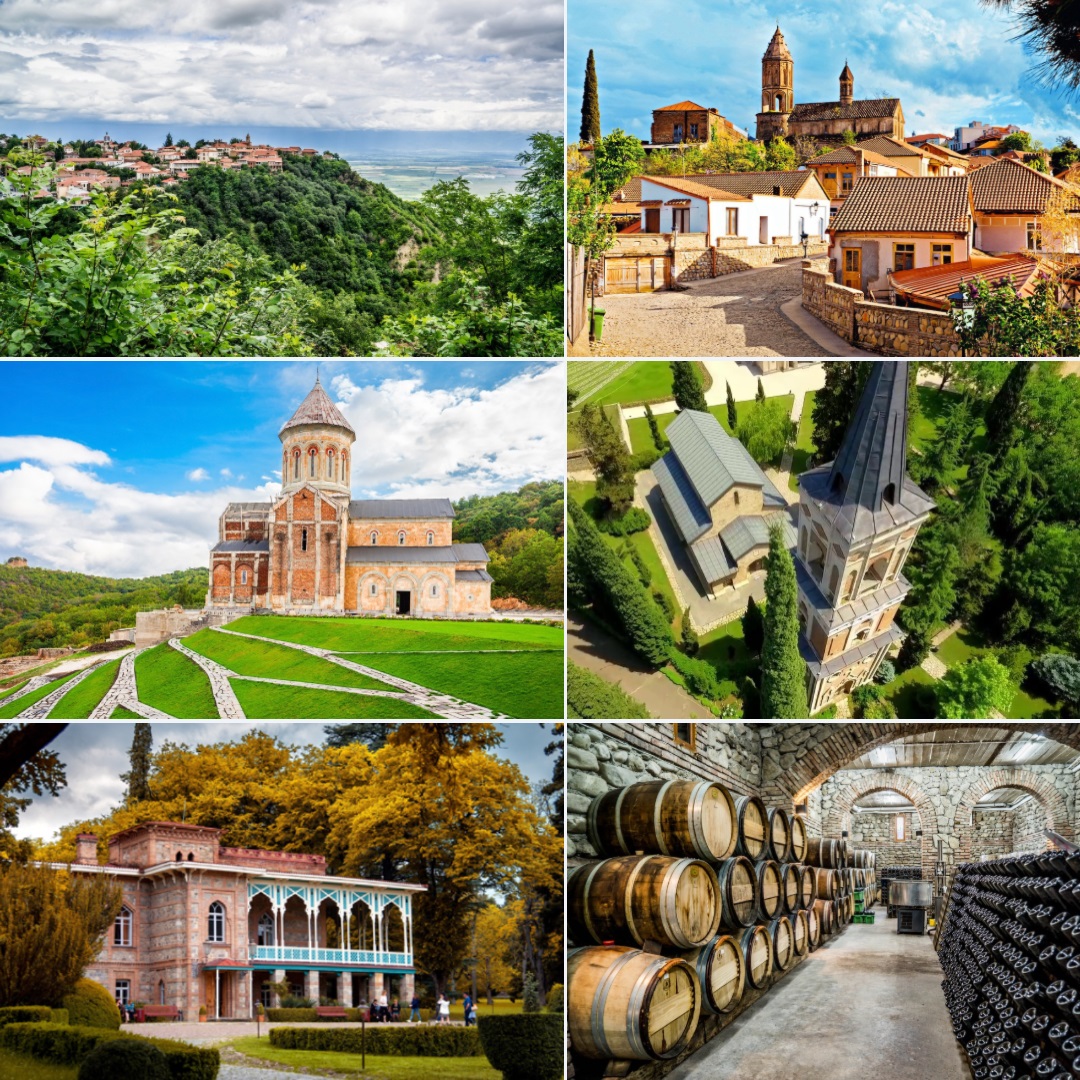 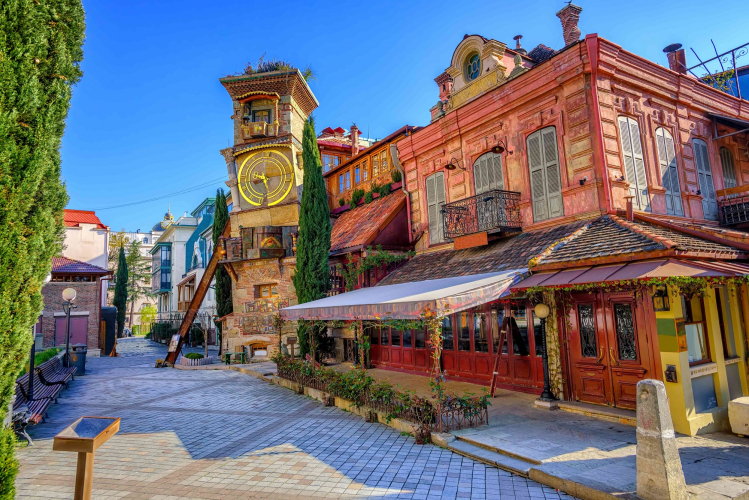 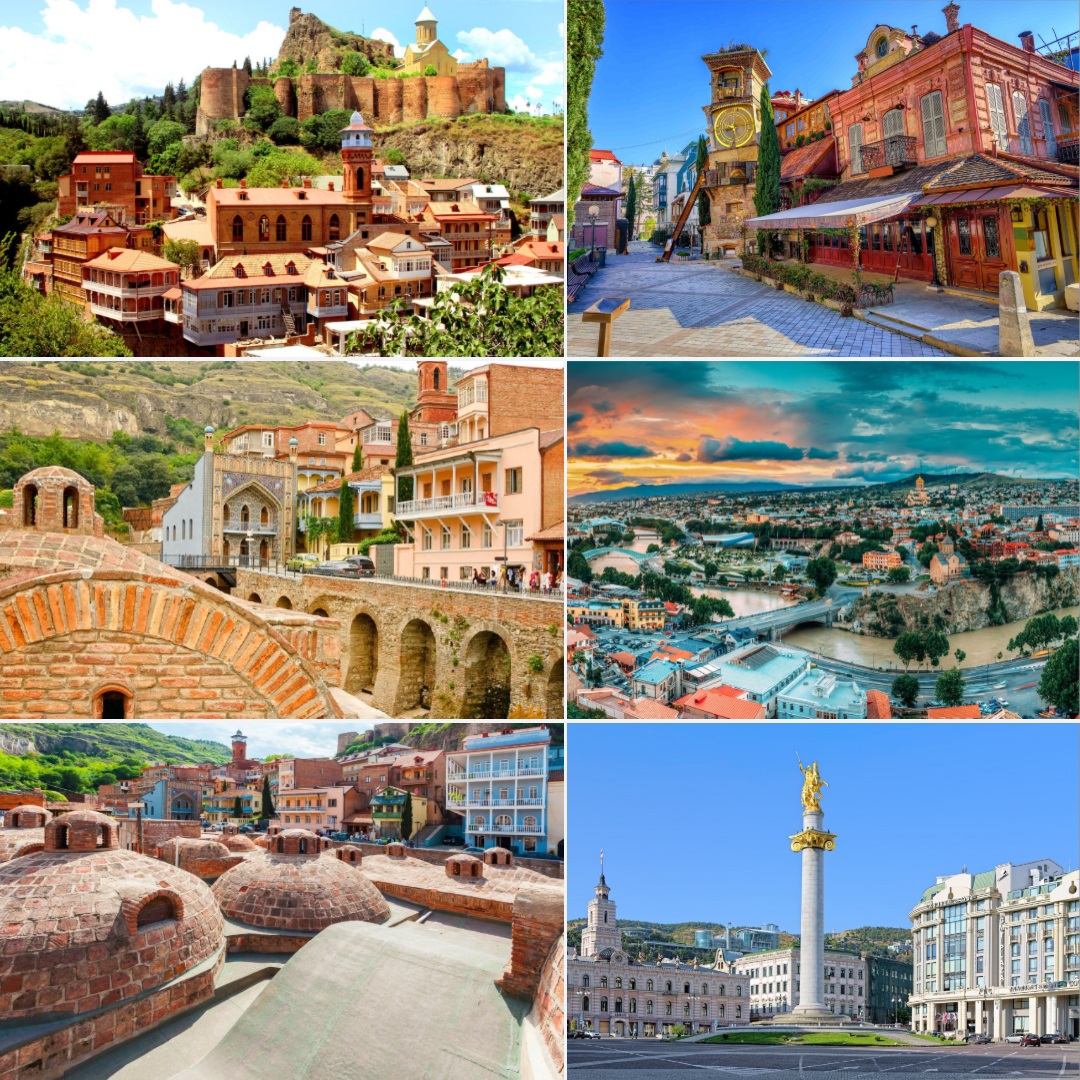 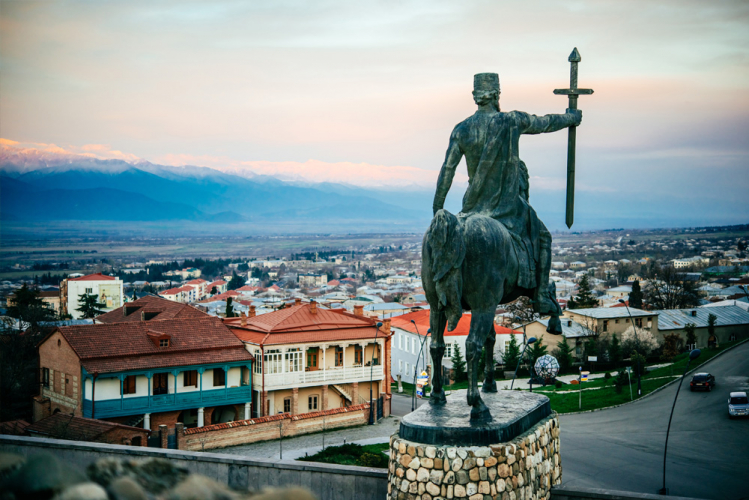 Why go? Take a walk through the vineyards, try the wine, buy it here, visit the most colorful and autistic market in Telavi, try all kinds of churchkhela, see the monasteries. In September, Rtveli is held in Kakheti - a grape harvest festival. Of course, nature is especially beautiful at this time. This time we get to Kakheti, passing the Gombory pass, this is a beautiful artery of a mountain road winding through the mountains, which gives a lot of beautiful views: pastures, gardens, villages, mountain ranges.

We begin the tour with a visit to the ancient academy and monastery Ikalto - Founded by saint Zenon in the VI century. The Monastery was famous as one of the most significant cultural-scholastic centers of Kakheti as well as of the whole of Georgia. A high school, the academy, was founded there; an outstanding Georgian philosopher Arsen Iqaltoeli used to live and work in it. Archaeological excavations revealed numerous workshops, wine-cellars, a smithy, store-rooms and other household rooms grouped around the Academy building. The academy of Ikalto trained its students in theology, rhetoric, astronomy, philosophy, geography, geometry chanting, etc..

We continue the tour and visit the small city of Telavi, which is located in the heart of the Kakheti region, in the Alazani Valley.

We will visit the castle and fortress of Erekle II- “Batonis Tsikhe” (translated as the fortress of the master), the former residence of the Kakhetian kings in the XVII-XVIII centuries. Inside the fortress is the royal palace, two court churches, a bathhouse and a tunnel. The fortress fence also includes observation towers.

We continue our journey on the highway between Kvareli and Telavi, to the small fortress Gremi, which was the capital of the Kakheti kingdom of the XV-XVII centuries. The city consisted of three main parts: the Arkhangelsk monastery complex, the royal residence and the shopping district. Gremi existed for only a century and a half, at the beginning of the 17th century the city was destroyed by the troops of the Iranian Shah Abbas I. Here you will hear the story of the creation of the city.

The monastery complex of Nekresi, which is located on the slope of the huge mountain Cavcasioni. This is a unique place for several reasons. Firstly, it was from here that Christianity began to spread throughout Georgia. Secondly, the 4th century church, which is the oldest in Georgia, is part of the Nekres complex. And thirdly, from the top of the mountain, on which the monastery stands, offers stunning views of the Alazani Valley. Once the monastery was home to more than 2,000 monks and was a fairly large city. Only a few buildings have survived to this day.

And in the end, the Alaverdi Monastery awaits your visit - the creation of the Assyrian fathers, namely Joseph Alaverdi, who came here in the middle of the VI century, and was buried in this temple, and the grave still exists. 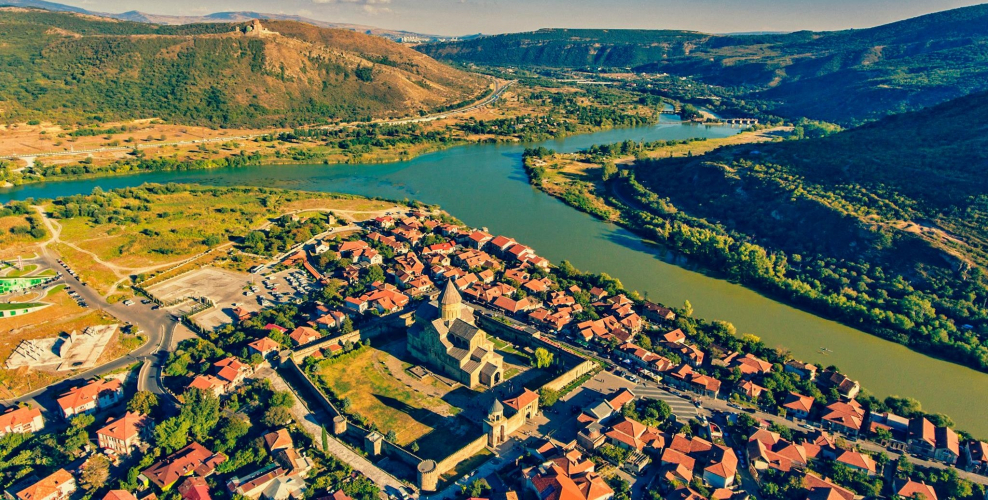 Uplistsikhe, whose name translates to 'Fortress of the Lord', is an ancient rock-hewn town, which played a significant role in Georgian history over a period of approximately 3,000 years. Extraordinary creation, moreover, the creation of nature and the hands of men. Archaeological excavations have revealed extraordinary artifacts dating from the late Bronze Age all the way up to the late Middle Ages.

Beginning its history in the 2-nd millennium BC, Uplistsike has been identified as one of the oldest urban settlements in Georgia. Back then, the complex was a very important cultural center for pagan worship in the Kartli (Iberia) region.

The ancient city of Mtskheta is a must-visit place in Georgia. Especially if you are staying in Tbilisi. Since the ancient capital of Georgia is only 20 minutes from the modern capital. This ancient city is called the "Second Jerusalem". Holy Nino Cappadocia brought the good news here, one of the greatest shrines of the Christian world, the Heaton of the Lord, is kept here. 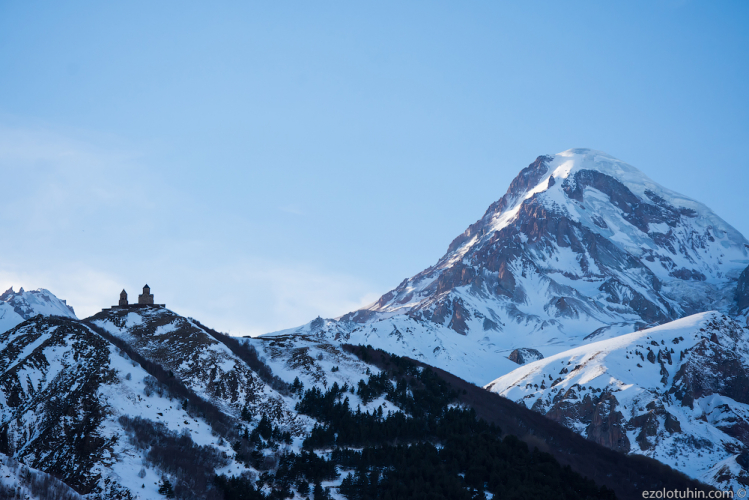 Leave all your worries to the other side of the border and go with us to visit and experience the magical beauty of one of the regions of SAKARTVELO-Kazbegi. Everyone knows that in this small country, all regions are radically different from each other in nature and culture, even the character and appearance of local people is radically different in the region. Maybe with one Glance Mountain people will seem strict and not talkative to you, but, like all KARTVELI, they are also very hospitable and proud who appeared to be their homeland. However, how differently, this is the great mountain Kazbeg.

On the way to Kazbegi we will visit the Ananuri Fortress (XVII century), which stands on the banks of the Zhinvalsky reservoir, and enjoy magnificent views from the arch, from a height of 2384 meters.

And finally, the last chord of this trip ... Get ready for the scale of magnificence that will soon fall on you, this is a spectacle that the Gergeti Trinity monastery, located at an altitude of 2,170 meters, should feel with all six senses, and Included in the 10 most beautiful temples in the world, a unique location makes it more beautiful and exciting.

The last point of your unforgettable trip will be the most delicious pearl of this Khinkali region with unique spices, such can only be prepared in Kazbegi, we will adjust the mood of your trip to the tone of smooth chacha. 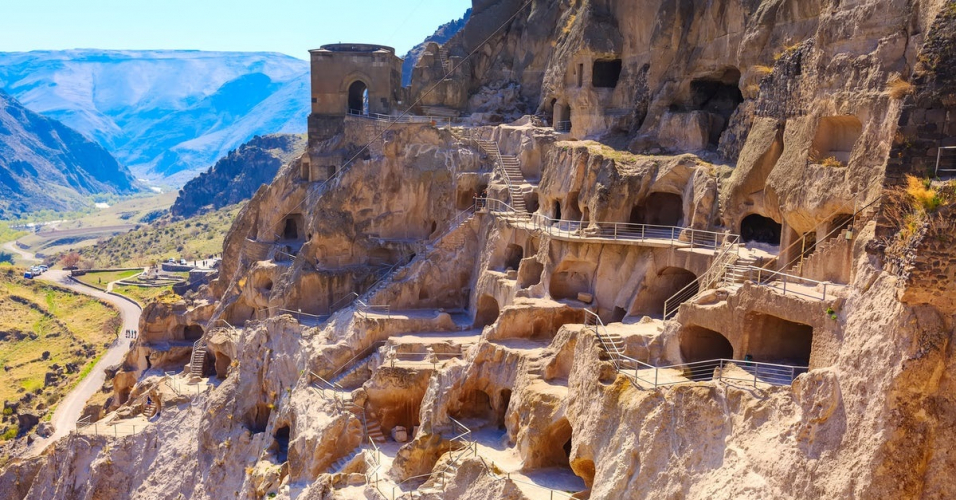 Transfer to the resort town of Borjomi, which is located in the south-eastern part of Sakartvelo. The resort is known for all its mineral springs. The city is surrounded by mountains covered with coniferous and deciduous forests. And Borjomi-Kharagagulsky National Park is one of the largest reserves in Europe. We will visit, Green Monastery ”, the name itself already tells about itself, is located away from the bustle of the world among the beautiful high mountains, dense green forests and on the bank of a fast noisy transparent river. The Green Monastery is one of the oldest male monasteries in Georgia. The most ancient building dates from 9-10. Once inside the temple, it is impossible not to feel the breath of antiquity. After visiting the monastery, we return to Borjomi. Hotel accommodation. Relaxation. After taking a break, you can walk through the central park of the city, where you can taste mineral water directly from the source.

After breakfast, we set off to visit the rocky town of Vardzia - a fabulous open-air museum, a product of the era of the Golden Age, the era of Queen Tamar. The complex at one time consisted of 13 floors and 3000 rooms. Vardzia is included in the UNESCO World Heritage Trial List. On the way, we will visit the Rabati fortress in the city of Akhaltsikhe, which is considered one of the tolerant places on the territory of Georgia. From the 9th century on this place, a representative of different denominations peacefully coexisted. After visiting the sights, we will have lunch and return to Tbilisi.